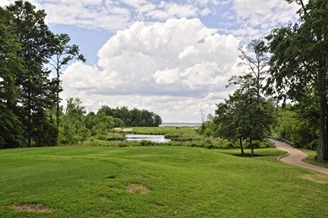 Because the Williamsburg area boasts nearly 400 years of European settlement and hundreds if not thousands of years of Native American habitation prior to that, anywhere you step just might be in the fossilized footprint of someone who went before.

The minds behind Two Rivers Country Club (part of the Governor’s Land Residential development) certainly discovered that fact, when some of the property’s history threatened to delay, if not destroy, completion of their golf course.

Tom Fazio, Two Rivers’ course designer, elaborates: “In the course of building the 18th hole, we found some skeletons along the banks of the Chickahominy River (the name Two Rivers stems from the convergence of the James and Chickahominy rivers, just off the banks of the 16th, 17th & 18th holes). There was quite a lot of discussion as to how to deal with the b

ones, and we worked with several different permitting agencies until a solution was worked out. As a result, we had the golf course literally built before we could get

Of course the 18th followed suit a few months later.

And the completion of the course was well worth the wait. Two Rivers is a private country club with three holes along the banks of the aforementioned rivers, and the balance winds in and out of some serene woodlands, open space and peaceful residential neighborhoods. It’s got the consummate private club feel.

Fazio says the topography was just right to create the type of golf course he’d envisioned for the property: “The property had what I call an upper and lower plateau, almost a ridge type of contour meandering through the land. We worked the routing through and near the view corridors of the river, and also across the ridge — the contours gave us some very interesting elevation changes to work with.”

“The property developer, Dominion Resources/Dominion Land, was really committed and dedicated to producing a distinctive type of development — not just for golf, but for the entire residential community. When you mention the word Williamsburg, the name just connotes something special and unique. That was attractive to me from the start. And when I went and saw the property with the two rivers right there, I knew right away it was an opportunity to work with spectacular views and settings,” Fazio added.

One thing that’s great about the club when you’re out on the course, you really aren’t bothered by a lot of outside influences. Being located  in a private residential community, there is never going to be too many distractions when you’re playing. The golf course will always be in great shape, and it provides a real fair test of golf.

The layout itself is extremely fair, and very forgiving to horizontally challenged golfers. Fazio no doubt believes wider is better, and he makes it a priority: “When you have a commitment to golf at a particular site, width becomes a very important issue to me as a designer. Length seems to be what everybody talks about, but the number one factor to me in creating a golf course is width — because that obviously relates to the quality of the golf experience. And that starts right up front with the developer.”

Another important issue is how the golf relates to its surroundings: “You also want the golf course to have good setbacks from the residents, so the golf is not interfering with the development, and the development is not interfering with the golf. That’s not easily accomplished, but you must have space to make that happen. In each particular case, a blending of the golf course with the environmental constraints and issues of the property involved,” Fazio said.

It’s clear the right ingredients were mixed together at Two Rivers. Fazio said there was also a unique opportunity to work open spaces into the overall community plan, which enhances the ‘feel’ of the club. It works together well. The houses are setback a generous distance from the course and protected by a thick buffer of trees in most areas. Standing on the tees, you won’t see many homes, which gives the course a real parkland feel.

The community’s distance from the course results in a very player friendly club with some subtle challenges: “Because the course is so wide, I’d say the green complexes are the toughest challenges on our layout. Our greens are quite large, but there’s quite a bit of undulation in them, including some tiered greens — and they’re complimented by shaved chipping swales, thick rough and deep bunkers. This is a layout where you can spray it a bit off the tee, but if you’re not precise with your approach shots and short game, you can get into trouble fast.”

“I especially like the way Fazio mixed in some long and short par fours. The first two holes are long and challenging — both over 440 yards from the back tees — but then a few holes later you’re looking at a couple at 351 and 315 yards. It’s the same way with the par threes — there’s a 254 yarder on the back nine, but you also have a 165 yard, downhill par three on the front nine. Each hole is different and challenging in its own way, without being overbearing,”

It was surprising to begin with two tough holes to open the round. The first is a 440 yard par four that doglegs left, playing uphill on both shots. Here you’re first introduced to Fazio’s challenging green complexes. The green’s not exactly a plateau, but it slopes down from all sides into a bunker on the left or a chipping swale in front, or rough to the other sides.

Fazio said it wasn’t pre-determined that the greens would turn out that way: “The greens at Two Rivers are challenging, but that’s not to ‘make up’ for the fact that it’s rather generous off the tee. The greens for that course, like all my courses, were custom tailored for the site. I just felt that those large greens would fit well there, with the scale of the property and the large amount of land we had to work with. I wouldn’t say there was any theme or trend we were looking to create.”

Two Rivers certainly eases up after the first few holes, but not on the course’s first par three, number four. It measures 208 yards from the tips and requires a full water carry to a large, undulating green guarded by a bunker in front and right. Club selection is pivotal because long’s not really an option — if you’re over the green, it’ll roll in the water.

The eighth hole is one of those terrific short par fours Warring alluded to above. He describes it: “Truthfully, a long-hitter could probably knock it onto that green. But at the same time, the green is very demanding. Even if your second shot’s a 40 or 50 yard pitch shot, you’re still faced with a ridge in the middle of the green that can run away from you. It’s a great hole because you have a chance to go for the green, but it also provides some danger.”

The back nine is highlighted by the finishing three holes, but the twelfth is also an excellent par four. The longest two-shotter on the back, it plays 430 yards and dead straight, with tree lines on both sides and bunkers guarding the fairway. Here too, the green is well guarded with a bunker on the short right and grass depressions all around.

The closing three holes are nothing short of spectacular, with a river view rivaling Kingsmill’s and some good golf holes to boot.

The 16th is a reachable par five at 504 yards in length, but you could face a stiff breeze if the wind is blowing as normal off the rivers.

Seventeen is another great par three at 209 yards with the river on the left. Eighteen measures only 377 yards, and with precise iron play could leave a good birdie opportunity at end the day.

For club members, that need not be the conclusion to a visit to Two Rivers. The club has a 90 slip marina, tennis courts, full service locker rooms, a dining room and a grill room. The community has several pools and miles of walking and biking trails. Definitely the slower pace you’d expect from living in Williamsburg.

Finishing up — today, there are no signs at the 18th hole commemorating the difficulty Fazio and the rest of the folks endured to complete this excellent golf course.   And the skeletons were safely and peacefully relocated nearby. A fitting resolution to a problem, as well as a great golf experience, no bones about it.

Memberships are available — and you do not have to own property at Governor’s Land to be a member of Two Rivers Club. Contact Rob Collins, Membership Director at (757) 565-5421 for information.

Information on the Governor’s Land residential development is found here

Welcome to Williamsburg Outside.com, your gateway to outdoor possibilities in the Historic Triangle of Virginia. If you’ve lived in the area for any period of time, you know a website like this is long overdue.If you’re new the Williamsburg area or in town visiting, and you’re into the outdoors, you really are in luck. This website is published and updated by local real estate agent Mr Williamsburg a.k.a. / IRL John Womeldorf who can be reached at John@MrWilliamsburg.com . If you need info on sports events please contact the event or park directly. I have no affiliation with them .. I would however be happy to assist you with any questions you have relating to moving to, or selling a home in Williamsburg VA.
%d bloggers like this: