The mature forest, ridges, bottoms, and wetlands of this 545- acre York County park are alive with a wide variety of woody and herbaceous plants that provide habitat for deer, raccoons, birds, turtles, snakes, millipedes, and more. The Virginia Department of Game and Inland Fisheries’ Birding and Wildlife Trail program has recognized New Quarter Park as one of coastal Virginia’s best sites for wildlife-watching and hiking.

History
Archaeologists have discovered prehistoric sites that reveal this land was home to Woodland Indians. After 1607, explorers from Jamestown crossed through the area to visit Chief Powhatan at Werowocomoco (Gloucester). The land along Queens Creek and the York River was granted to English settlers beginning in the 1630s.

In the early 1700s, Robert “King” Carter named this tract New Quarter, one of many quarters or farms that made up his landholding. He gave it to his grandson, Carter Burwell, who built Carter’s Grove. Slaves lived and toiled here for about 150 years. Nathaniel Burwell, Carter Burwell’s son, and many of his slaves moved west after the American Revolution. 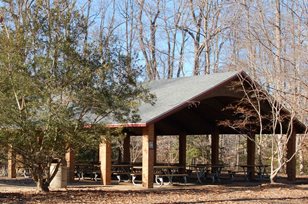 During the Civil War, Union Troops at Fort Monroe launched a campaign to take Richmond, the Confederate Capital. Earthworks were built to slow the advance; Redoubts 12 and 13 are within the Park. After the Civil War, the forest grew while the land was lightly used by tenant farmers. York County acquired the property at no cost through the federal surplus land act program in 1976 on the condition that it be used for recreational purposes. Today the park is enjoyed by thousands of outdoor and recreational enthusiasts.

Welcome to Williamsburg Outside.com, your gateway to outdoor possibilities in the Historic Triangle of Virginia. If you’ve lived in the area for any period of time, you know a website like this is long overdue.If you’re new the Williamsburg area or in town visiting, and you’re into the outdoors, you really are in luck. This website is published and updated by local real estate agent Mr Williamsburg a.k.a. / IRL John Womeldorf who can be reached at John@MrWilliamsburg.com . If you need info on sports events please contact the event or park directly. I have no affiliation with them .. I would however be happy to assist you with any questions you have relating to moving to, or selling a home in Williamsburg VA.
Join 82 other followers
%d bloggers like this: