Construction crews have put the finishing touches on the Powhatan Creek multi- use trail. A new asphalt now connects the Virginia Capital Trail to, The Greensprings Interpretive Trail , the neighborhoods of Pointe At Jamestowne, St Georges Hundred, Chancos Grant, and Clara Byrd Elementary.

The trailhead begins and parking is available behind Clara Byrd Baker Elementary School, 3131 Ironbound Road. Users can walk, ride or run on the paved 2-mile, 8-foot wide multiuse trail which connects to nearby neighborhoods as well as the Greensprings Interpretive Trail, the historic site known as Church on the Main, Mainland Farm (considered to be the oldest continuously cultivated farm in America’s first English settlement) and the Virginia Capital Trail.

This segment of trail utilized several previously constructed trail segments for interconnection and is partially funded by a matching grant from the Virginia Department of Conservation and Recreation. The trail crosses the main stem of Powhatan Creek and has been designed to replace a deteriorating sewer bridge and will support an existing sewer main between the Chanco’s Grant Subdivision and St. George’s Hundred Subdivision.

Construction of the Powhatan Creek Trail is part James City Greenways Master Plan.  The goal of the Greenways plan is to link, neighborhoods, parks and schools together in a network of trails allowing residents to traverse the area without having to ride on the roadway.

History of the Greenways Master Plan in James City County

In March of 1997, a conceptual greenway plan was produced and approved by the Parks and Recreation Advisory Commission.The County’s pilot greenway project, the Greensprings Greenway, located behind Jamestown High School  was completed in June 2001.

The benefits associated with greenways are overwhelmingly positive. Communities investing substantial resources to this effort enjoy widespread citizen support and the realization of healthier lifestyles, a more diverse economy, a beautiful environment, and a more enjoyable quality of life.

Initial trail projects in 2003-2007 were located primarily on existing parks because they are already in public ownership. 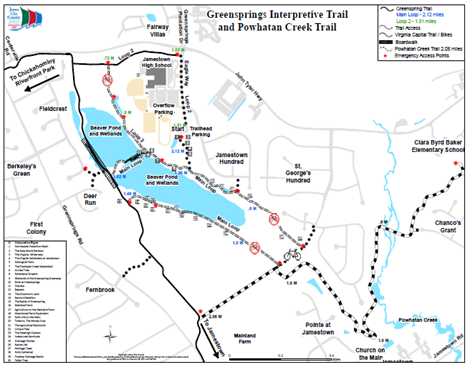 Welcome to Williamsburg Outside.com, your gateway to outdoor possibilities in the Historic Triangle of Virginia. If you’ve lived in the area for any period of time, you know a website like this is long overdue.If you’re new the Williamsburg area or in town visiting, and you’re into the outdoors, you really are in luck. This website is published and updated by local real estate agent Mr Williamsburg a.k.a. / IRL John Womeldorf who can be reached at John@MrWilliamsburg.com . If you need info on sports events please contact the event or park directly. I have no affiliation with them .. I would however be happy to assist you with any questions you have relating to moving to, or selling a home in Williamsburg VA.
Join 82 other subscribers
%d bloggers like this: